DECC response to HOME as reported by geoengineeringpolitics blog

http://geoengineeringpolitics.blogspot.com/2011/11/uk-government-rejects-call-to-suspend.html
Posted by matt watson at 12:34 No comments:

Guardian reports on the Nature article

Slightly unfairly framed (of course!), but I am grateful that I (unlike the Nature article) was accurately represented. Thanks also for Camila Ruz (the author), for getting the figure caption changed from this

'The project will inject particles into the atmosphere to reflect some of the sun's energy.' 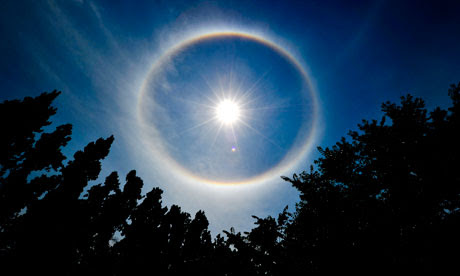 The project will test the feasibility of injecting particles into the atmosphere to reflect some of the sun's energy.

Here's the bit I am quoted in - I've added corrections to clarify (as if I'd had some editorial control)...

The principal investigator on the project, Matthew Watson, denied that the decision to postpone it was a direct result of the outcry from green groups: "I'm glad the environmental movement have a strong voice," he said, "but the decision was made before any of the really deep green movement got involved the letter from the deep green ENGOs was received" A review of the project two months earlier had concluded that without more public engagement it could not go ahead. The stagegate review, in mid-June, concluded that preparations for the balloon experiment could continue whilst further work was undertaken to engage with a broader range of stakeholders. The final decision to postpone was designed to give the SPICE researchers further time to complete that effort and to reflect on the outcome(s).

Now the first test of the technology will be put on hold until a second review meeting approves the stakeholder engagement the researchers have done in the intervening time. "We've developed a plan and begun initial discussions with these NGOs so we can get round a table and talk," said Watson.

The controversy surrounding the project is unlikely to fade away. "I think it's a lightning rod for people who don't think it's a good idea and naturally even believe in researching climate engineering options and, who, unfairly, think the scientists involved want to see this through to deployment and - that really isn't the case at all," said Watson. He is not an enthusiast for climate geoengineering as a policy option and firmly believes that cutting greenhouse gas emissions should be the top priority.

{My position is a little more nuanced than that, of course - see 'Sceptical Realist' on this blog for my current personal framing on SRM vs CRD - but I am happy with that description on a fundamental level. Of course, in the absence of evidence-based research the only sensible, objective (i.e. professional as opposed to personal) position is agnosticism}.

"If the politicians came back from [international climate talks in] Durban with a legally binding agreement on CO2 emission reduction of some meaning … that would make research projects like Spice much less important relevant," said Watson. "But each time they don't, when they think of political rather than geological climatological {I am fairly sure I said 'climatological'} timescales and they think about being re-elected or putting the economy first at any cost then that just makes research into climate geoengineering even more necessary."
Posted by matt watson at 06:48 No comments:

Phil Macnaghten and Richard Owen have published a review of the stagegate process in Nature this week...

Whilst reporting it in full here doubtless breaks numerous copyright laws I think I can discuss (and quote) specifics...

'Aspects of SPICE's governance could have been improved. The framework should have been in place before the project's conception; the test date should not have been announced until the stage-gate criteria had been met; and the structures and resources to support the social research should have been in place earlier. Even now, the decision on whether to proceed will not be easy. There are few right or wrong answers to the many questions about climate engineering. But it is vital that we make space to listen to and discuss these questions, and that the debate transparently influences the decisions that are taken.'

I think, overall, I agree with this. SPICE, of course, had no control over the pre-workshop decisions on governance and social research and I have strongly endorsed the position that social scientists should have been part of the workshop process. Such is the nature of that process. The test date is a harder one - for the record SPICE were determined to be as open as possible about the outdoor experiment and have been accused, utterly unfairly, of being secretive. We needed clearer signals that the stagegate was likely to be imposed - I worry that it could be misconstrued that we ignored the signs from the panel and ploughed on with the press briefing anyway.

Phil and I are on Material World (BBC radio 4) this afternoon at 4.30 pm to discuss this live. I am sure, as always, it will be a positive and useful interaction.

http://www.youtube.com/watch?feature=player_embedded&v=gHZzACcYJRo
Posted by matt watson at 02:19 No comments:

Of course, being a member of SPICE, I know Kirsty pretty well. Her views closely mirror my own and I think this article strikes the perfect tone...

http://theconversation.edu.au/geo-engineering-why-research-something-we-never-want-to-use-3684
Posted by matt watson at 06:54 No comments:

I think part of the reason I am so comfortable with the stage-gate process is that I believe in collective restraint. The metaphorical 'cliff' looms large, and governance (even opposition to the idea of geoengineering) is like a safety barrier - it prevents me from using intellectual freedom negatively. It is good that this [global scale SRM] cannot be done easily, and that no one has the freedom to undertake research without responsibility. It frustrates me greatly that those who are mindful of this are under great scrutiny, regularly inaccurately and irresponsibly reported, when others have already conducted field trials (e.g. Yuri Izrael) without any governance whatsoever.

News pre-Durban gets more depressing by the day...